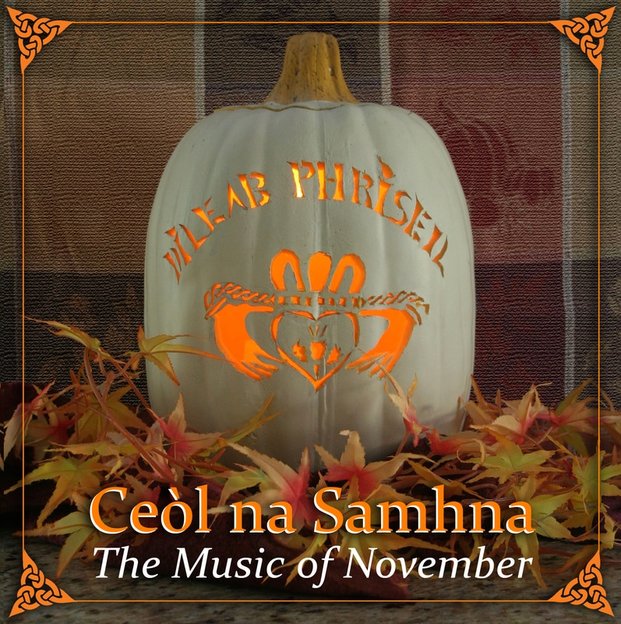 Track #1: On Haloween Night (translation by Scott Morrison)
On Halloween night there are, there’ll be,
Witches and demons innumerable, you’ll see.
There’ll be fairies with laughter,
Riding sky-horses chasing after,
And kidnapping women and their kiddies wee.

There’ll be many a man a-weeping,
And the children mournfully crying.
And the women, they’ll be a-wailin’,
And not without reason, they’ll be sayin’,
While to the hills, the fairies, they’ll be dragging.


Track #3: The Tailor And The Ghost Of Kilnure Church
A long time ago, many believed that some of the old churchyard ruins were haunted by ghosts and goblins innumerable.  After nightfall, very few there were who would be willing to even go past one of them, especially if they were removed from the dwellings of the living. Even fewer were they who dared to go inside a place so vile at the silent hour of midnight, and yet, the occasional fearless man would offer to perform this deed as proof of his bravery.  To make certain he indeed completed his daring-do, there was a skull of a man left in the crannies inside the old church ruins.  As soon as 12 o’clock would strike, he would have to go into the ruin alone where he would take the skull out with him back to the place where his companions would await his arrival.

Once there was a tailor living in the town of Fincharn just to the south of Loch Awe.  He had denied that there was a ghost at all.  Well, his neighbors dared him to prove to them that he was serious by going to the Kilnure grave yard at the witching hour and bring back with him,  the skull (which gave the place its name) that was in the window of the old church.

The Tailor answered that he would give them stronger proof than even that by sewing a pair of trews in the church between retiring time and the crowing of the cock on the same night.  They took him at his word and as soon as 10 o’clock in the evening came about, he entered the church.  He sat upon a tombstone that was laying on four posts and after he put a lit candle nearby him, he began his late and lonely work.  The first hour went by uneventfully while he was sewing.  He kept up his courage by singing and whistling the cheeriest tunes he could recall.  Eleven o’clock past in the same manner without him even hearing or seeing a single thing that would lower his spirits.

However, sometime after that he heard a noise coming from a tombstone that was between him and the door.  After he peered in that direction he, thought he saw the earth under it rising and falling.  At first, the sight surprised him.  Then he quickly decided it was the flickering of the candle in the darkness that caused it.  So, after he gave a shake of his shoulders, he turned back to his work and kept on sewing and singing as happily as he ever did.

A little after that, a gravely, hoarse voice came out of the same grave saying, “There’s the big, moldy hand without any food, oh Tailor!”  However, the Tailor answered, ‘’I see that while I sew this’’ and he began to sing and sew just as he did before.

A little while later, the same gravely, hoarse voice called out, louder this time, ‘’There’s the big, moldy head without any food, oh Tailor’’ but, the Tailor answered again, ‘’I see that while I sew this’’ and he sewed faster and he sang louder than he did earlier.

On the third hour, the voice spoke with the loudest, most unworldly noise that it yet made, “There’s the big, moldy rib without any food, oh Tailor!”  The Tailor replied with his usual, “I see that while I sew this” as he plied the needle faster and drew the stitches further apart.

This work continued for a while; the dead corpse exposing next his thigh and finally his foot.  Then it said with a terrible voice, “There’s the big, moldy foot without any food, oh Tailor!”  Once more, the Tailor answered bravely, “I see that while I sew this.”  However, he knew that the time had come for him to flee.  With that, he finished his work with two or three large stitches and an ugly knot on the end.  He blew out the candle and he leapt out the door.  The dead corpse followed him and drawing back a mighty blow, it aimed for the Tailor.  It struck a doorjamb where it left an image of its hand and fingers which lasted for many days.

Fortunately, the Fincharn cock now began to crow and then the dead corpse fell back into its grave while the Tailor returned triumphantly home.

Verse 3
A thin bonnet and a wool sweater (3x),
Is on my love in the Summer!

Track 15: Gleanntáin Ghlas' Ghaoth Dobhair  (Little Green Glens of Gweedore) (translation from here)
Farewell to the noble mountains of Donegal
And twice farewell to tall Errigal, arching over rowen and ash tree
When I passed by Dunlewey lake, lying quietly in the glen
Behind me were the little green glens of Gweedore, and it nearly broke my heart

Travelling through Glendowan's Hills, and Muckish behind me
I don't mind saying with sorrow and grief, that tears fell from my eyes
Westward to America was my journey, far across the wide sea
I said farewell for a while to Donegal, and the little green glens of Gweedore

I never wanted to leave my own beloved land
But the foreigner's heavy handed deceit and treachery drove me away
It would be my heart's desire to return again, when I should get a little money
To spend the end of my life with my family, 'round the little green glens of Gweedore

Yet farewell, farewell to Donegal, the County fine and fair
And to your brave men who in time of need, did not ever cower before the foreigner
There's a place in my heart for each man and woman, each child big and small
Who live in peace, without sorrow or grief, in the little green glens of Gweedore